The herb coriander is a rather complex chap.

It has flat, broad leaves that become more feathery the higher up they are on the plant. It's small, pail pink flowers give rise to the fruit, or coriander seeds, which start off green and then turn brown as they ripen. And both the seeds and the leaves are used extensively in Indian cooking and are collectively called 'Thania' (so now you know).

The flavours, aromas and properties of the leaves and the seeds all differ, so they're used in very different ways and at varying stages of the cooking process. In some cuisines, such as Thai food, even the roots of the coriander plant become an ingredient.

As with most herbs and spices, coriander has medicinal uses as it contains anti-oxidants and compounds that have antibacterial properties. This helps reduce food spoilage (so it's a great spice to use in a marinade). It's also been used as a treatment for anxiety and reportedly has such a calming effect it can help with insomnia.

In more traditional medicine, coriander has been cited as a treatment for diabetes as it contains a compound that has an insulin-like activity. On top of all that, in India the seeds are boiled and this fragranced water is then used to help relieve colds and reduce sinus problems.

All that from one delicate little herb! 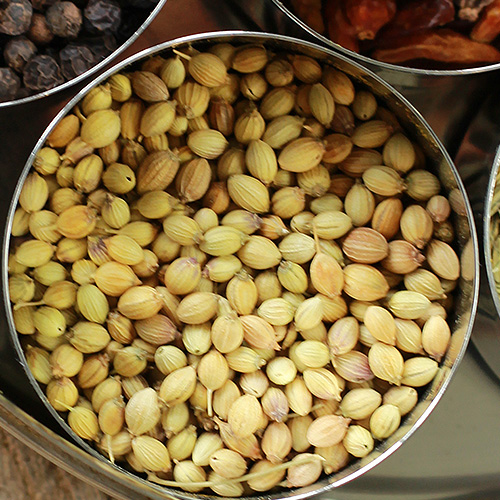 The seeds are small and round with ridges on the outside. Creamy brown in colour, they can be used as a whole spice or ground into a powder. In their raw state, these seeds have a distinct citrus flavour that imparts a real warming sensation (as well as a nutty texture) when used whole. By lightly toasting coriander seeds, this flavour and pungency is heightened. Weirdly, some people think they give an orangey flavour while for others it's more lemony. Either way, they add a delicious light and airy citrus fragrance to your dish.

I would recommend that the seeds be stored whole and crushed as and when required. The seeds really work well with lamb and lifts rich dishes such as Lamb Madras, lentils and in particular Dhal Makhani and the citrus zing of the seeds works wonders with fish dishes such as Goan Fish Curry. It's amazing in marinades and really brings out the light, refreshing flavours of barbecue dishes. Coriander in this form is also an important component of the garam masala spice blend. 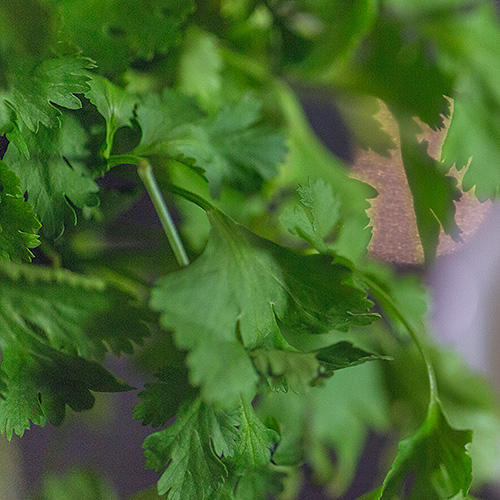 The leaves (also known as cilantro in the US) have a delicate fresh perfume that adds a savoury summer aroma you can't beat. This being said, fresh coriander tastes awful for some people! Turns out that there's a known medically proven, genetically determined variation in taste for coriander so some people really do hate it or love it.

Heat tends to diminish the flavour of fresh coriander leaves, so chop them and add to your dish just before you serve it. But surprisingly the leaves can be used in spice pastes to give a really fresh tasting dish and I love using loads of it in my Coriander Fish, I also pack it in to many of the dips and chutneys I make - my Avocado Salsa just doesn't taste the same without fresh coriander.
Don't forget that the stalks are full of flavour too, so please don't just throw them out. I like to use them when I'm making the base masala sauce for my favourite Chicken Curry. So chop the leaves (and stalks) nice and finely and add them to your salad, or to flavour rice and couscous dishes too. Simple, fresh, lovely.

By the way, in India this addition of coriander at the end isn't just about a garnish. For many Indian households it's thought that serving a dish without it is not worth serving at all as coriander finishes the dish visually, in flavour and in aroma.

When I was a kid I used to think the same about ketchup...