Pressure cooking is back on trend

If you grew up in an Indian home, then I suspect the thought of using a pressure cooker still makes you jump out of your skin or freeze like a statue unable to move with the fear that the unpredictable high pitch screech of the pressure release might go off any second. Very closely followed by the hisssss of hot steam pouring out from the nozzle on that evil contraption on your mums stove.

I still remember how it would fill our tiny little kitchen with the hot aromatic fumes that either made you run for the hills or simply burst into tears. The aftermath of cooking with the beast usually left a sequence of turmeric stains on the walls and ceiling which seemed to be a common feature in many Indian kitchens. All that said, after the trauma of the cooking we would all settle down to a luxurious meal that all came from that voluminous pan. Always accompanied with soft white fluffy rice or super soft roti’s that are still my favourite breads ever.

As I grew up I didn’t really make the connection between the food and the pressure cooker simply because as soon as I saw the pan and my mums muttering which always followed – where’s the valve for the top? I can’t find the rubber seal? and so on, but before the ignition flickered, we would scarper out of the kitchen.

Until recently I still used the pressure cooker my mum had handed down to me which had all the special freaky features mentioned above. I'm not sure why I haven't explored other options but having started to work with Kuhn Rikon I very soon discovered that I was cooking in the dark ages! 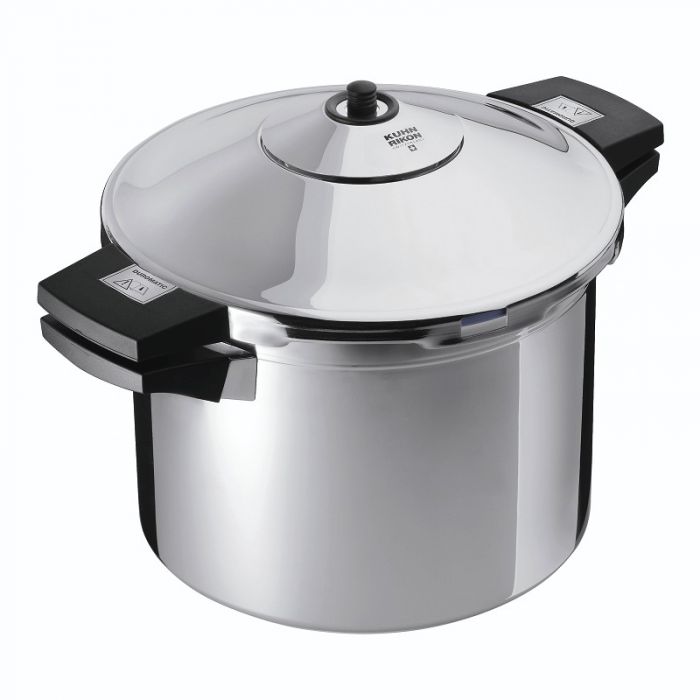 Technology has come a long way since my mum brought her pressure cooker over from India and most of the horrors and risks have been improved. No longer do you have to put up with the high-pitched whistle and most have new safety features such as locking handles that only open once the pressure has been released (genius).

Other mechanisms mean that the build up of excess pressure no longer occurs and the gush of steam being released no longer need to happen. The hissing, spitting and spluttering along with the removal of the fear that you would be scalded is a welcome change.

What is the purpose of a pressure cooker?

This pan cooks your food under pressure which reduces the time the food takes to cook. Almost the opposite of a slow cooker this is a contraption that cooks high and fast. There are many benefits for doing this and as with everything I think it’s a great addition to use as part of your food preparation.

For many people they worry about pressure cooking because they simply don't know how or what to cook in the pan.

You can actually cook anything in a pressure cooker. You just have to understand the process.

How does a pressure cooker work?

The cooker uses steam in a secure sealed pot to cook food. When you heat the pot the liquid boils and turns to steam, when it's trapped in a sealed pot the pressure begins to build. The high pressure cooks the food by transferring heat energy from the steam into the food. It cooks the food more quickly because it increases the boiling temperature of the liquid in the pot (because it's under pressure) and the pressure forces extra hot liquid into the food.

How to use a Pressure Cooker