Coconut and Its Products

The coconut and all its products are extremely versatile ingredients.

The coconut comes from the coconut palm. These palms are indigenous to India and grow on the coastal Southern states from Kerala to West Bengal. The palm is simply incredible for so many reasons. Every part of the tree from root to leaves can be utilised and so can every part of the coconut (which is botanically a drupe).

Coconut is an extremely versatile ingredient. The flesh can be consumed raw just as it is, as can the water inside the nut. The humble little coconut is an amazing thing - the meat can be processed in different ways to produce other ingredients such as oil, cream, milk and even flour and vinegar.

It is also highly nutritious and packed full of vitamins, minerals, amino acids and good fats.

For the liquid products, the flesh is heated in water or milk and squeezed.

Once the pulp is sieved, it leaves behind an oily liquid. As the liquid cools, the fat and water separate, with coconut cream solidifying at the top and the water sinking to the bottom.

This process can be repeated a number of times to create different grades of cream, oil and milk being produced. The first filter contains the most fat content, resulting in a much thicker coconut cream. With each respective filter after this, the amount of fat decreases creating more of a coconut milk.

This is the clear natural water that comes from the coconut when you crack it open. This has become very popular over the last few years and is a great thirst quencher. It's been called nature's sports drink because it has high levels of potassium, is low in calories and is highly nutritious (when kept natural).

This has a higher fat content and is richer and thicker than coconut milk. You can make this at home by simmering about four parts shredded coconut to one part water or milk until frothy and then straining it through a cheesecloth.

This is much more liquid in consistency - a bit like cow's milk. This is made with roughly one part water to one part shredded coconut and has a lower fat content. It is used a great deal in Thai cuisine.

The is coconut cream that has been sweetened and is usually used for desserts and drinks. This is not something that can be substituted instead of coconut cream as it has a high sugar content. 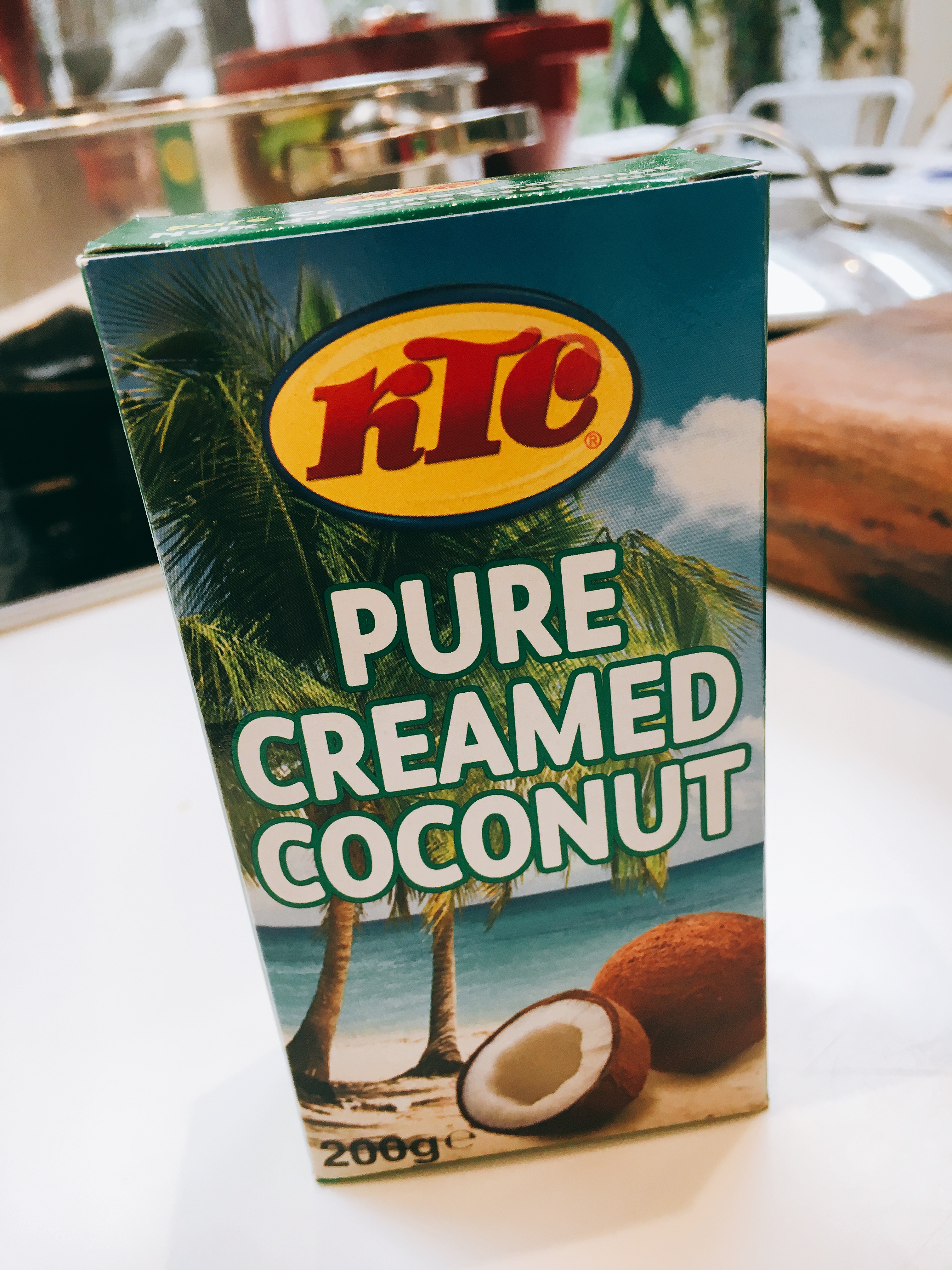 This is a fantastic oil to use. It's solid at room temperature and has a high smoking point so is very stable. To read more about this oil and its benefits read my coconut oil guide.

This is the pureed flesh of the coconut and is similar to the oil but much creamier. It can be made at home by blitzing the flesh until you get a puree that is the consistency of peanut butter. This is delicious smeared on toast but is also used in the cosmetics industry in moisturisers, shampoos and soaps.

This comes from the sap of the coconut tree. It's boiled and reduced, resulting in a natural sugar syrup like Maple. Being a natural sugar, it's released more slowly into the body and is rich with vitamins and minerals.

This is used as a condiment and souring agent in Southeast Asian cooking and is specific to this region. It's a natural product made by fermenting the sap and is high in probiotics and amino acids.

Coconut solids come from the dried flesh of the mature coconut which is known as copra. It can be shredded, ground and used for a number of different cooking products.

This is dried shredded meat of the coconut. It's great for topping desserts, baking, puddings, ice creams but I find for some Indian dishes, this texture is a bit dry so it doesn't work amazingly well with some saucy dishes but it's fine if you want a dish with some texture. You can get desiccated coconut in coarse, fine, shredded, stips and even granules.

I love using coconut milk powder. It's a fine powder that is rehydrated with hot water and can be used to make a creamy, coconut sauce and also acts as a thickener too. You can use it as a substitute for cow's milk in tea, coffee, on cereals and in smoothies as well as in desserts.

This is a byproduct made from the processes used to produce coconut milk. Coconut flour is a great option if you are coeliac as it's gluten-free. Compared to wheat flour, it has a very low starch content but is higher in protein and fibre. When cooking with it, it absorbs a lot more moisture than wheat flour so you will need to up the liquid you add in your recipes. It may also be worth combining this with other flours, such as almond, to help bind it together.

This is the same as the coconut nectar but in a crystalline form - it can be used in the same way as sugar to sweeten anything.

*Disclaimer: This post was produced in conjunction with a paid partnership with KTC Edibles.

Want to see ' Coconut and Its Products ' Recipes?