Why do we eat fish on Friday?

Odd thing to do, when you think about it. But this ‘Friday fish’ thing comes from the days when Christians would fast as a form of personal discipline (this usually meant just avoiding meat on certain days). Back then, any sort of meat was a luxury and was really only consumed by those who were rich enough to buy it or could afford to slay a few livestock. However, anyone could fish, even the very poor. So as it was considered a more lowly and humble food, and as Jesus was reportedly crucified on a Friday, and that one day a week had to be a semi-fasting day, then Friday became the one they chose to eat fish. Puts new spin on TGIF, doesn’t it?!?

When I was growing up we’d have fish ‘n’ chips from Upper Villiers chippy every Friday. This was run by a lovely Greek family (or were they Sicilian?), either way my dad would spend ages talking to the owner about the trials/tribulations/joys of being an immigrant in the UK as I sat there yawning. Anyway, Friday night dinner was just awesome because when I was growing up, Indian food was all we ever ate at home. So going round to a friend’s after school for sausage and mash or pie or trifle was a just wonderful, so our Friday night ‘English’ was pretty special (I also had a strange fascination with school dinners but that’s another story). Because my family come from the Punjab region in India, fish wasn’t something that we ate a lot of as kids. We had a few classic dishes such as Fish Pakora and my mum’s amazing Pilchard Curry (that made an appearance when money was tight) but fish pretty much remained off the menu until I began to cook for myself. Some of the fish dishes that are commonplace in South Indian cuisine are just phenomenal, and we’ll talk more about those in my Recipe section [link]. But before we get into the cooking bit it’s good to know what to look for when buying fish. So here are a few tips.

Ideally, go to a fishmonger. Few and far between, I know, but there are some amazing local fish markets around (it's not just Billingsgate) as well as brilliant fish delivery companies such as The Fish Society and there's always a local fish delivery guy too. If you remember one thing about this whole blog is that it’s really important you buy your fish as fresh as possible. Here’s some key pointers:

1. Check the fish - the flesh should look beautiful and shiny, the skin should be almost metallic and clean looking.
2. Smell it - the fillets shouldn’t smell fishy.
3. Check the moisture – if present it should be clear and not milky.
4. Feel it – press the flesh; if your fingerprint doesn’t disappear, buy another piece that’s more springy!

Filleting a Round Fish

I know you can buy your fish all ready prepped in a plastic packet but it’s a good idea to really get to know your food. All you need is a sharp filleting knife with a slight flex to it, a chopping board and just a little nerve…

1. Remove head of the fish by cutting at an angle just under each fin towards the head.
2. On the underside slice again to join the two cuts.
3. Pull the head off and remove and discard any innards.
4. Make an incision along the skin on the back of the fish to one side of the dorsal fin. Place the tip of the knife in and run from the top to bottom tail along the bones.
5. About a third of the way from the tail, push the knife down and right through the fish to create the exit point.
6. Then cut the fish from this point through to the tail (breaking the tail of the fish); gently run the tip of the knife along the whole fillet to the tail.
7. Stroke the knife under the fillet, making sure not to loose too much of the flesh. Separate the fillet from the fish and place to one side.
8. Repeat on the other side. Tidy the uneven skin around the fillets.
9. Use tweezers to pull out the bones from the fillet, or cut them out.

Fish are categorised into oily fish (such as mackerel and sardines) and white fish (such as cod and bass) and both are a tremendous source of vitamins and minerals. Fish is packed with omega-3 fatty acids and eating it just once or twice a week can help protect you against depression, heart disease, arthritis and even some forms of cancer. Just read this and see how important it is to our diet [link].

This is such an important environmental issue and one we can all help support. Intensive fishing practices have decimated stocks over the past few years; for example, the population of Bluefin tuna is now so low it will take ten years for them to recover their number. Ten years.

Luckily, there have been a number of high profile awareness campaigns in the UK around this issue led by the brilliant Hugh Fearnley Whittingstall. As consumers (and as parents), it’s our responsibility to understand where and how our fish are caught, and that we make the right choices when we buy it.

There’s more info on the National Geographic website about this issue which makes great reading.

There are some classic ways to cook fish from currying it to deep frying it to marinating it with funky flavours. It’s easy to think that that Indian spices will be too much for the delicate flavours of fish, and of course, if you completely overdo it then you won’t taste much. But it’s all down to how you cook the dishes. Red snapper smothered in tandoori spices, my own spice encrusted scallops and wonderful French-influenced seafood cassoulet (I must add these two recipes to the website!) all work superbly. Anyway, to get you started with fish and Indian food, here are some of my faves:

The amazingly fragrant Goan Fish Curry brings together the South Indian cooking style with tamarind and coconut to create a hot and tangy sauce that surprises and delights in equal measure. 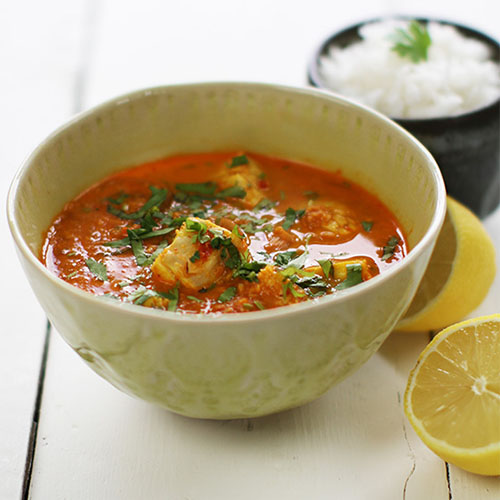 Nariyal Muchchi is a superb midweek curry dish - hot and spicy but really quick and easy to make. This dish is a real North, South hybrid with zingy Southern flavours but a sauce that takes its roots from my Punjabi cooking style. 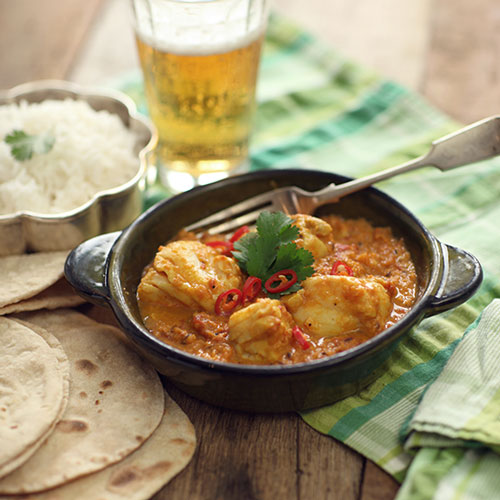 I love my Masala Machchi. It’s a dish I make all the time because it’s a light, simple supper that’s healthy and delicious, and works well with a fresh green salad. One of those dishes that make you feel like you’ve been to the gym and eaten good stuff.

Fish Kebabs are just so good. For mine I use a combination of white fish to hold the spices and salmon for your omega-3 oils. These kebabs are so versatile I even serve them in burger buns with loads of my Spiced Tomato relish. 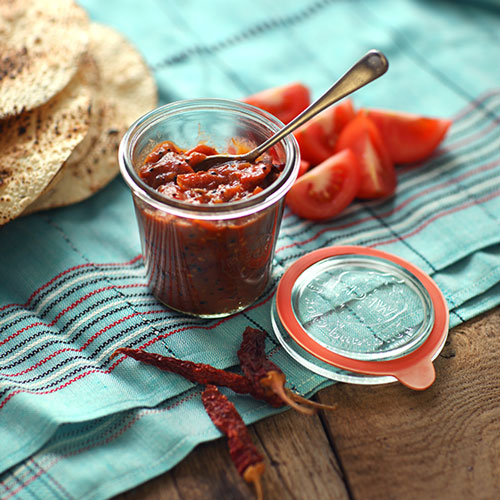 So there we have it. Fish is good for you, it’s easy to cook, it tastes great, it’s delicious with Indian spices and you only need to make sure you put at least one fish dish on your menu every week. And it doesn’t have to be on a Friday!