I am a chilli nutcase!

From growing them to eating them to researching their history, flavouring food with them and even to drinking them (yes, really), I love ‘em (I even keep a chilli spray in my bag for those food emergencies when I need some heat). Which is why it was rather strange that when I came to write about them I found myself a bit stuck. Where to start? There’s just so much to say about these little devils…

I think chillies are just magical. They are beautiful to look at and have such wondrous shapes and vibrant colours from red to green to purple to near-black. And they’re wildly good for you. The thought of what is about to come when you eat them is actually exciting and it’s one of the few ingredients you can dial up and down to dramatic effect. 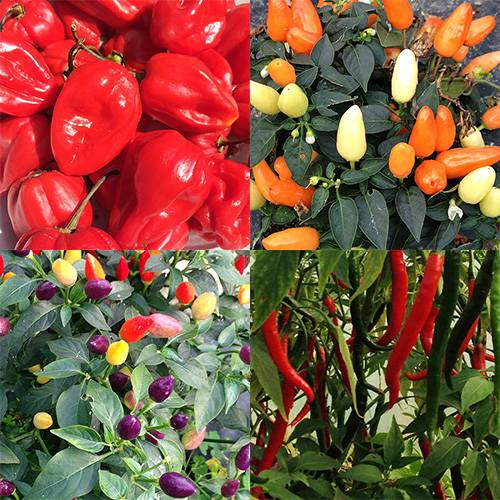 Anyway, let’s start at the beginning:

The chilli pepper is the fruit of plants from the group known as capsicum (capsicum is also a part of the nightshade family). They contain chemicals that are collectively called capsaicinoids, with capsaicin (aka 8-methyl-N-vanillyl-6-nonenamide) being the most common. And it’s this group of compounds that gives chillies the intensity when eaten or touched.

Where do they come from?

Chillies were first discovered in the Americas and after the voyage of Christopher Columbus (food history is so amazing) in 1492 there was a mass transfer of animals, plants, culture, people and technology between the Western hemisphere (the Americas) and the eastern hemisphere (Africa, Asia, Europe). This is referred to as the Grand (or Columbian) exchange which took place in the 15th and 16th century. It was at this time when explorers introduced maize, potatoes and tomatoes to Europe, and cassava and peanuts were taken to Asia.

So it seems chillies were brought to Asia by the Portuguese and because of the soil and climate, chillies flourished in India. Today, chillies are an integral part of their cuisine and India is the worlds largest producer, exporter and consumer of chillies – now that’s something to be proud of!

There are thousands of varieties of chillies grown across the world but they all come from five main species. These are:

1. Capsicum annuum – meaning ‘annual’ and this includes many common varieties such as bell peppers, wax, cayenne, jalapeños, and the chiltepin

3. Capsicum chinense – reportedly to mean ‘from China’ and includes the hottest peppers such as the naga, habanero, Datil and Scotch bonnet

For more detailed information on these chillies and all the different varieties, have a look here.

Ever wondered why chillies are hot?

When you eat a chilli the capsaicinoids (mentioned earlier) bind with the heat-sensing pain receptors in the mouth and throat. This sends messages to the brain so the body responds to the sensation of burning by increasing the heart rate, releasing endorphins and increasing perspiration. So that’s why you sweat, pant and feel alive when you eat chillies! Nothing to do with the cold beers you glug down afterwards… Different chillies impart their heat at different rates. Some release a quick, hot burst that passes very quickly where as others like the habañero build up heat slowly.

The official heat scale for chillies is measured in Scoville units (a system developed by Wilber Scoville in 1912). Old Wilbur extracted the capsinoids then diluted them in a sugar water solution. Increasing concentrations of this were given to panel of trained tasters (I would have loved to have been one) until the majority of them could taste the heat. Nice idea, but this method has its flaws as different people’s taste buds vary and we also become desensitised to chilli the more we eat it. Today, the scale is measured using slightly more scientific methods such as high performance liquid chromatography. Have a look here for more info.

The scale starts from a score of 0 for a sweet pepper up to over 1 million Scoville units for the bhut jolokia which is currently the world’s hottest chilli. The jalpeño and chipotle chillies score between 2,500 to 10,000 and habañero and Scotch bonnet score 80,000 to 300,000+… ouch!

Chillies can be used in so many ways from the green (immature) to red (ripe) as fresh ingredients, as dried hot powders, whole dried, pickled, roasted, with seeds, without seeds, blistered, filled, as a garnish – you name it, you can do it with chillies. And they’re used in food across the world and each country has their favourites.

Chillies are also making more of an appearance in the world of desserts from chilli chocolates puddings  to fruits with chilli syrups. And as for drinking it, chillies appear in a Bloody Mary (you have to look at these recipes), the Red Snapper (Bloody Mary made with Gin) and the Spicy 50 plus this one - the Silver Spice from Benares to name a few. 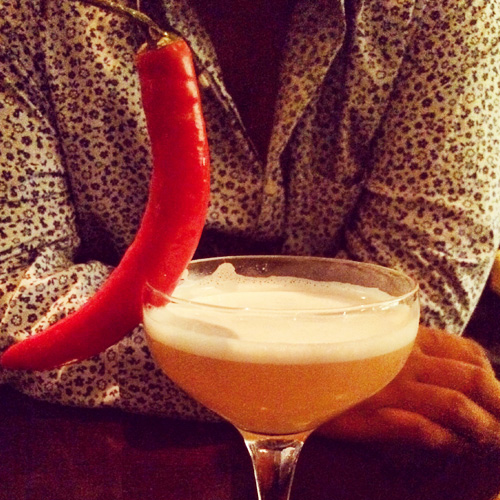 As well as the heat and clearing your sinuses chillies are packed full of vitamins and minerals that are good for you. These components help to ward off colds in the winter as well as having antibacterial and anti-inflammatory properties so chillies are known to help with arthritis. The active ingredient is also used as a pain killer and chillies help to relieve headaches too. One word of warning - always wash your hands after you have chopped chillies!

Chillies, or capsaicin, has other uses too. It has been used as a defence weapon in the form of pepper spray and also in crop defence.

Apparently elephants dislike the capsaicin in chillies as they have such a sensitive sense of smell. To stop them feeding on their valuable crops and destroying fields of vegetation, farmers plant pungent chilli fields or build walls of chilli and dung nearby as a deterrent. So the next time an elephant is charging towards you, just knock up a spicy curry and you’ll be laughing!

1. Chillies are the world’s oldest condiment and there has been scientific evidence to show that they were consumed in Central and South America as long ago as 7000BC (they were even used as tax payments).

3. The world hottest chilli is the Bhut Jolokia or ghost chilli from Assam at a Scoville rating of over 1 million. Jason McNabb (USA) holds the record for eating the most chillies in two minutes - that's 66g (or 13 whole chilli peppers) - phew!

4. Eating hot chillies increases your metabolic rate which can help you loose weight.

5. Chillies have antibacterial properties and help sooth a sore throat and ward off a cold. They are packed with vitamins C, D and A as well.

6. Birds do not feel the heat from chillies like us mammals, so they’re great distributers of the chilli seed.

7. The hotter the chilli, the higher the rush of endorphins which is a similar chemical release you get when you exercise. Some people find this addictive (not the exercise bit, obviously).

8. The hottest part of the chilli is not the seed – it’s the white pithy bit where the seed joins the internal membrane.

9. Milk or yoghurt is the best thing to relieve the burning sensation (lassi is great for this). Water just helps to spread the pain. Cold beers don’t work either, but they do taste nice…

10. There are natural anti-oxidants in chilli which have been shown to help prevent certain types of cancer.

If like me you love your chillies then here are a few chilli places I love:

South Devon Chilli Farm A fun outing if you are in the area. They have wonderful greenhouses full of plants plus a shop with grow your own chilli kits to some seriously hot sauces and some delious chocolates too.

Chilli Pepper Pete has a great selection of chilli sauces from something mild to cazy blow your head off heat.

Chillifest is a wonderful celebration of all things chilli from plants, food, sauces, sweets you name it they have it and it's a fun day out too.

Finally, here is some more fab information about the wonderful chilli pepper.

To embed this infographic in your website, simply copy the code below and paste it into your site:

chilli
Back to Blog